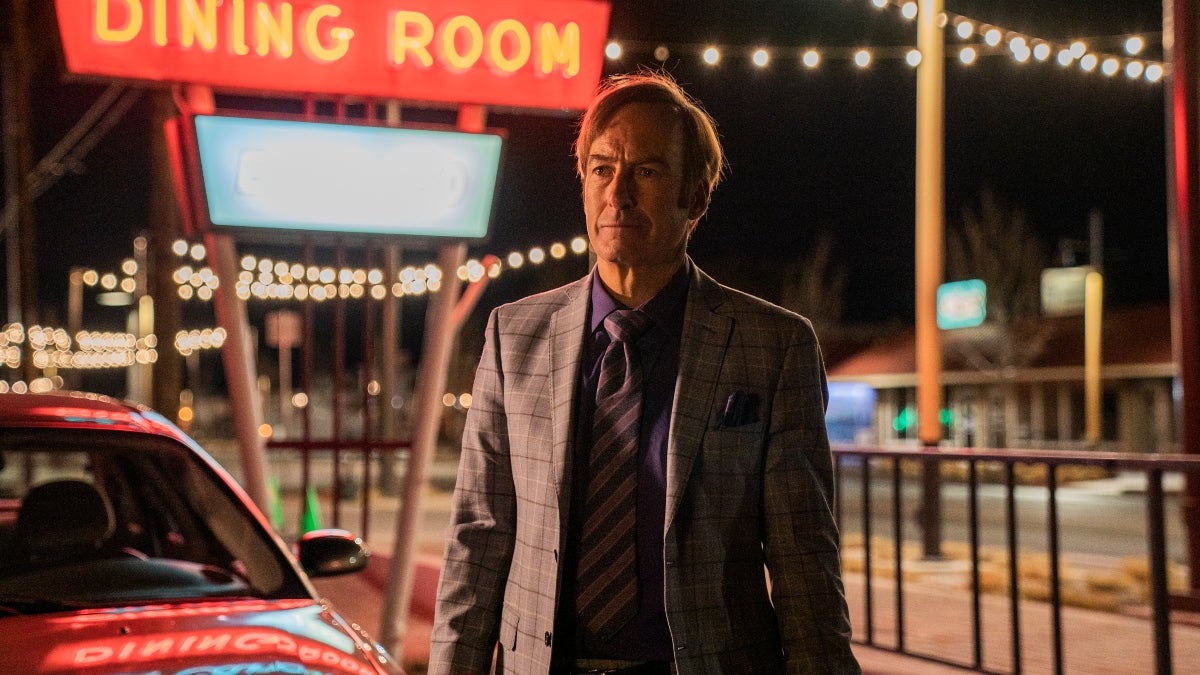 It’s another huge week for television. This no doubt has to do with the upcoming Emmy nomination deadline at the end of May, as the number of high-profile prestige series (either returning or brand new) increases to the point of reaching a critical mass. This week alone, we have the long-awaited return of “Better Call Saul,” “Russian Doll,” and “The Flight Attendant,” plus a new show where huge stars can play “The First Lady.” And documentaries documenting the lives of polar bears, the career of Magic Johnson, and how racist and bizarre Abercrombie & Fitch is. Truly, it is a golden age.

On the way with television!

It’s been almost two years since the previous season of “Better Call Saul,” Vince Gilligan and Peter Gould’s knife-edged prequel series to their beloved “Breaking Bad.” It’s a long wait, especially since the show ended with Kim (Rhea Seehorn) heading to the dark side. (Given that she never appears in “Breaking Bad,” we should consider this a very bad thing.) Quite frankly, after Bob Odenkirk’s health crisis last year, we’re lucky the show is back – and he’s feeling great! A word of caution, though: you might want to rewatch Season 5 before jumping into this new season, just to refresh yourself on the intricacies of the ongoing drug trade and the relationship between franchise heavyweight Gus Fring (Giancarlo Esposito ) and Lalo Salamanca (Tony Dalton, who stole every scene he had in “Hawkeye”), among others. AMC has already revealed that Walter White (Bryan Cranston) and Jesse Pinkman (Aaron Paul) will be making guest appearances this season, bringing the “Breaking Bad” continuum full circle. Keep in mind that AMC splits the season into two; the first batch of episodes will air this week (and end on May 23) and the next batch won’t debut until July 11. But after two years, a few weeks won’t matter much. [TRAILER]

It’s not just a season finale for “Black-ish” this week; it is also the series finale. The Kenya Barris-created show felt quietly groundbreaking, particularly in its fearlessness about relevant, at times uncomfortable, social issues. (That got him in hot water at times with the Disney brass; one episode never made it online and Barris eventually decamped, first to Netflix, then to ViacomCBS.) “Black-ish” also created its own interconnected television universe, with “Grown-ish” airing on sister channel ABC Freeform (it was just renewed for a fifth season) and “Mixed-ish” airing for two seasons alongside the flagship series on ABC. (A third spin-off, “Old-ish,” starring Laurence Fishburne and Jenifer Lewis, was briefly developed but no longer moving forward.) After 175 episodes, the series is coming to an end. course for any prime-time sitcom, let alone one that tackles as many issues and takes as many risks as this one. [TRAILER]

The Dark Knight Returns… streaming. After a major theatrical release in March, co-writer/director Matt Reeves’ “The Batman,” starring Robert Pattinson in cape and cowl, is now making its streaming debut. It’s a very different take on the character; instead of full-scale superhero theatrics, it’s more of an intricate murder mystery, with the Riddler (Paul Dano) as the killer. (Don’t worry, villains like the Penguin, played by an unrecognizable Colin Farrell, and Catwoman, played by Zoë Kravitz, are still making appearances.) catch up. Just be sure to crank up the sound system (both for the sets and for Michael Giacchino’s ominous score) and turn off the lights. And if you really want to go back to what it was like to watch Tim Burton’s “Batman” at home, “The Batman” will also premiere on HBO linear on Saturday. [TRAILER]

A new Disneynature movie (in theaters or on Disney+) has become an Earth Day tradition. And this year is no exception. “Polar Bear,” from filmmakers Alastair Fothergill and Jeff Wilson, follows a polar bear cub as it grows and has its own cubs. Storytelling is always very important in these films and this time they cast Catherine Keener, who provides a unique first-person version of storytelling that manages to be specific and more philosophical. Of course, there is a tinge of sadness in this beautiful documentary, given the difficult situation in the Arctic Circle, due to the advanced stages of global warming. Maybe this movie will be a rallying cry on this Earth Day. [TRAILER]

If the above was not very clear, the new season of “Better Call Saul” jumps into the deep, it does not hold your hand and guide you into the kiddie pool. In order to prepare well, why not take a look back at the entire franchise, starting with the flagship series “Breaking Bad”, about a high school teacher (Cranston), recently diagnosed with cancer, who starts cooking meth to save his life. family from financial ruin and ends up being the American Southwest’s answer to Scarface. In “Breaking Bad,” we’re introduced to a slippery, morally nebulous lawyer named Saul Goodman (Odenkirk). His evolution from a kind-hearted person named Jimmy McGill to the man we know well on the show is expertly illustrated in “Better Call Saul.” And just for fun, why not watch the ‘Breaking Bad’ follow-up feature, ‘El Camino’, which is written and directed by franchise mastermind Vince Gilligan and is set immediately after the events of the series finale. “Breaking Bad”. Like everything associated with this franchise, you’ll be on the edge of your seat the whole time. [WATCH]

This new series, created by Aaron Cooley, imagines the different personal lives of the First Ladies of the United States. That’s about all you need to know. Just listen to this cast. Viola Davis is Michelle Obama, Michelle Pfeiffer is Betty Ford, and Gillian Anderson is Eleanor Roosevelt (is there anything this woman can’t do?) As for presidents, we have OT Fagbenle as Barack Obama, Aaron Eckhart as Gerald Ford and Kiefer Sutherland as Franklin D. Roosevelt. Even if the show sucks, it will be worth seeing what these amazing actors do with the roles. [TRAILER]

“White Hot: The Rise and Fall of Abercrombie & Fitch”

“White Hot: The Rise & Fall of Abercrombie & Fitch” traces the essentials of the suburban mall as it rises to the peak of popularity (at least for high schoolers who wanted to master that “preppy but disheveled” look we We’re All Looking For) and his meteoric fall from grace, following accusations of discriminatory hiring and heightened scrutiny of the brand’s “All American” (white) image. Produced and directed by Alison Klayman, this will be the perfect documentary for anyone who’s ever walked past the store and thought it incredibly bizarre that a shirtless young dude was standing just outside. [TRAILER]

How’s that for a long wait? Season 1 of “Russian Doll” dropped on February 1, 2019. The show, which combines elements of drama, comedy and trippy sci-fi, stars Natasha Lyonne (who also co-created the show with Amy Poehler and Leslye Headland) as a screwed up New Yorker (are there others?), who finds himself in an “Edge of Tomorrow” time loop that starts over every time she dies. What other oddity will happen to him in season 2? It’s time to find out. We’ve waited long enough, after all. [TRAILER]

One of the biggest surprises of the new HBO Max was how fun “The Flight Attendant” was. It was so much fun that what was originally intended as a limited series was hastily brought back for another season. And here we are! A wonderful Kaley Cuoco is back, unwittingly falling into more international mysteries and struggling with her sobriety, we’re sure. If you’ve never seen the first one, give it a quick watch before the new one debuts. It’s addictive enough to binge on for a weekend. [TRAILER]

“They Call Me Magic”

Think of it as a counterpart to HBO’s splashy (and hugely controversial) “Winning Time: The Rise of the Lakers Dynasty.” Or maybe a response to ESPN and Netflix’s “The Last Dance.” But no matter how you think about it, this four-part documentary dives deep into the life of Magic Johnson, from his early days as a college basketball phenom to his stint with the Lakers to his life-changing confession that he had contracted the HIV virus and beyond. – to his philanthropic and entrepreneurial work. This documentary looks magical. [TRAILER]