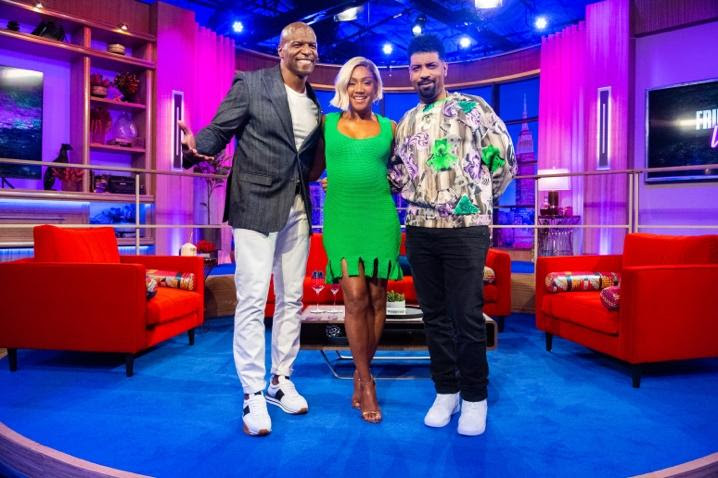 This week’s episode of â€œFriday Night Vibesâ€ is the perfect start to the weekend, with a special performance by singer Ledisi, as she stops to perform â€œWeekendâ€.

To get the summer off to a good start, Tiffany, Deon and Terry talk about all barbecue things and give viewers a fashion show featuring the two types of uncles you’ll see at every barbecue, the quintessential summer jams that still barbecue and the most popular dishes – greens, cornbread, macaroni and cheese – that make a great barbecue.

Plus, Tiffany shares her favorite moments from previous BET Awards, while Terry discusses her workout schedule and some of the craziest things he’s seen on “America’s Got Talent.”

With a mix of comedy, celebrity interviews and musical performances, Haddish, along with Cole, guides ‘Friday Night Vibes’ viewers through this celebration of life, cultural diversity, special moments behind the scenes and genuine conversation. The program will be the zero point for those who love movies, black culture, music and spending time in the beauty salon and barbershop.

The weekly lineup includes carefully curated films that are packed with stories and characters that viewers love and with whom special guests will be announced accordingly. The â€œFriday Night Vibesâ€ summer 2021 program is as follows:

Ledisi is a singer, songwriter, music producer, songwriter, playwright, film producer and CEO of her record label, Listen Black Entertainment / BMG. She is also a recipient of the NAACP Image Award and Soul Train Award, and launched her latest project, “The Wild Card”, last summer on her new label. She has a new album, “Ledisi Sings Nina”, which will be released on July 23 and will begin a tour this summer.