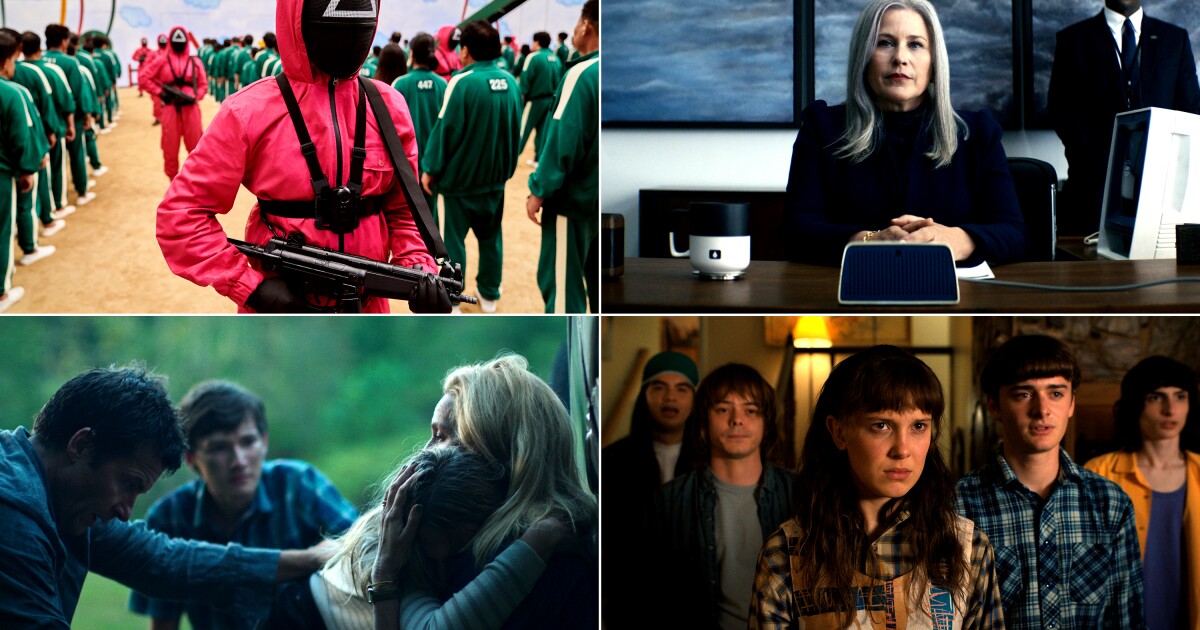 It would be nice to see the Emmys as a time of escapist fun.

For people in the television industry, of course, the race for Emmy gold is a fierce competition worth multimillion-dollar advertising campaigns. But for the rest of us, Tuesday’s Emmy nominations should be a bright spot in the news cycle, a little light reading among the stories of the mass shootings, the Jan. 6 committee reveals, the horrors post-Roe and the inflationary panic.

And yet I am worried. I can’t help but notice that most of the major drama series contenders involve characters struggling to survive situations far beyond their control.

In “Squid Game,” “Severance,” “Stranger Things,” and “Yellowjackets,” the protagonists are trapped by outside forces greater than themselves: a murderous economic system embodied in a game; an earth-shattering business system embodied in a terrible office space experience; an alternate universe controlled by a lab-created demon; the possibly possessed wilderness (and the matrix of trauma it leaves behind) following a plane crash.

In “Succession”, “Ozark” and to a lesser extent “Better Call Saul”, prisons are a little more DIY, a combination of unfortunate circumstances twisted into something worse by certain dogmas of family, power, identity and heritage. The Roys (“Succession”) and the Byrdes (“Ozark”) weave their way through cycles of internal conflict that are only calmed, momentarily, by the regular reminder that this is a world “we against them” in which self-protection is the highest good and ample justification for just about any action. (The Emmys-favorite crown would fit nicely into this subset, but alas, we have to wait another year for its COVID-19-delayed Season 5.)

“Euphoria” does double duty in this regard: high school is the ultimate mental/social experience, and Zendaya’s Rue fights addiction.

Some of that fear and fatalism (“life is ugly, but what can you do?”) also permeates this year’s limited series, detailing the art of con (“Inventing Anna,” “The Dropout”) as well as corrupt corporations (“Dopesick”) and class division reviews (“Maid”, “The White Lotus”).

But it’s the highly rated dramas, taken collectively, that worry me the most.

Obviously, dramas require, well, drama. There are shows with healthier characters and lower stakes, but they’re often comedies — or hopeless dramas for Emmy buzz. Survival stories, with the inevitable tension between necessity and morality, have fueled most Emmy nominees and winners for years. But as “The West Wing” gave way to “The Sopranos,” award-winning television took a darker turn, leaving us in recent years with the naked and vicious power struggles of “Breaking Bad,” “Game of Thrones” and “The Handmaid’s Tale.”

Even in this context, this year’s list of nominees is alarming, but perhaps unsurprising. Television has long been a mirror through which we examine our collective anxieties.

Beset as we are by the pandemic, economic crisis, political division, an ongoing opioid crisis, and a virtually unregulated digital universe in which all manner of good and evil can thrive, it’s easy to feel trapped. by forces beyond our control. Easy to feel like pawns in a game or part of an experiment. It’s easy to sense that an alternate universe is sending agents of chaos into ours.

It’s all too easy to adopt an us versus them mentality that justifies any behavior we might deem necessary to protect ourselves and those we love.

The stories we tell about ourselves always reveal something about the human condition (even if it’s our ability to spoil a perfectly good story by telling it in six hours instead of two). The shows, movies, and books we reward with our time, praise, and trophies inevitably speak to big, often-hidden truths in ways that are most often witty rather than literal.

Television has covered all sorts of modern social concerns, from terrorism to nostalgia; There’s been a lot of talk lately about the growing reliance on superhero stories to guide our conversation about our larger desires and fears about power. With that comes a lot of responsibility, as people keep telling Spider-Man, but even Marvel doesn’t seem to really know what that’s like.

This year’s Emmy nominees pretty much shed the symbolic ambiguity of superhuman abilities and cut to the chase.

the horrifying examination of poverty and capitalism in “Squid Game”; The chilling metaphor of “Severance” for the growing demands of the American workplace; the rise of an alternate universe literally called the Upside Down in “Stranger Things”; the perils of addiction (“Euphoria”); and the corrupt nature of the 1% (“Succession”) – this year’s Emmy nominees are all much closer to the bone than “The Sopranos” or “Breaking Bad” or “Game of Thrones” got never done.

(Although perhaps not as close as “The Handmaid’s Tale”, which the conservative minority seems to see more as a plan than a warning.)

But perhaps it’s “Ozark,” starring the notoriously likeable Jason Bateman and Laura Linney, that shows just how much television — and our fears about the arc of justice — have changed.

“Ozark” follows the Byrde family’s increasingly cold-blooded attempts to extricate themselves from an “accidental” debt to a drug lord. The Byrdes believe they are fighting to survive but, like the Roys, their definition of survival includes complete irresponsibility.

Increasingly, their real desire is to retain power and control; ultimately, the series ends with jaw-dropping cynicism.

Because they succeed. Unlike Tony Soprano or Walter White or countless other anti-heroes who end up paying for their sins, the Byrdes emerge from their mobile slaughterhouse unchained or riddled with bullets – but victorious.

“Don’t come at me with this fairy tale about good and evil and those who cheat are punished,” Linney said, mimicking her character’s lack of contrition in a recent Times interview. “‘Are you kidding? Watch the news.'”

We do, we do. And now we are witnessing an Emmys run that, in too many disturbing ways, reflects this news as though through glass and in a dark way.