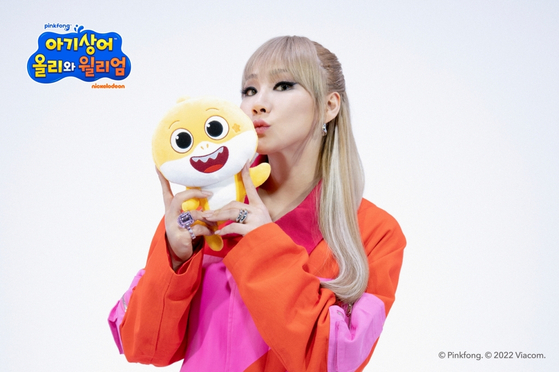 The CL singer will try her hand at voice acting for the very first time in the children’s animated television series “Baby Shark Olly and William” on EBS 1TV, according to her agency Very Cherry on Thursday.

CL will portray a shark character named Sharki L, who is described as the “greatest star of the seven seas” in the upcoming episode “My own Seaweed Dance” (translated). The episode will air on EBS 1TV on July 4.

CL’s character is the Korean version of a character named Sharki B, who was voiced by rapper Cardi B in the global animated series “Baby Shark’s Big Show”.

“Baby Shark Olly and William” is the Korean version of “Baby Shark’s Big Show” which was jointly produced by Nickelodeon and The Pinkfong Company, formerly known as SmartStudy. The global episode, titled “The Seaweed Sway”, was released in April in countries including the United States, Britain, Italy and Australia.

Meanwhile, the singer appeared as a guest on several local entertainment shows such as “You Quiz on the Block” to share behind-the-scenes stories of how she was able to pull off a surprise performance with the four members of 2NE1 at the Coachella Music Festival in California in April. She will continue to perform overseas, such as Main Square Festival in France on June 30, Wireless Festival in Germany on July 8, RFM Somnii in Portugal on July 9, and Summer Sonic in Japan on August 20 and 21.