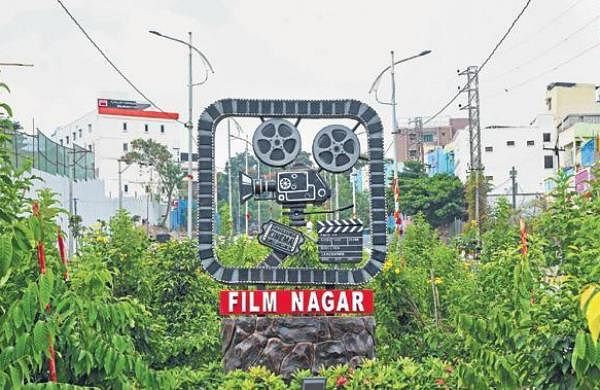 HYDERABAD: While fairy tales read in childhood would only figuratively take you into a magical world, commuters going from Film Nagar to Kotha Cheruvu can now experience a bit of magic without having to rely on their imagination.

The 430-metre-long central median in the Khairatabad area which was developed by the Greater Hyderabad Municipal Corporation (GHMC) now houses four cinema-themed sculptures. Film Nagar is known to house many Tollywood personalities. Thus, the four sculptures were wisely inspired by memorable pieces of cinema.

The first sculpture bears a striking resemblance to the snap of the charming Gene Kelly from the legendary 1952 musical Singin’ in the Rain. The “almost real” umbrella only adds to its authenticity and transports us to a land of singing and rain. It is quite similar to the statue of Gene Kelly installed in Leicester Square in London.

Next comes a sculpture with a clapperboard, an old-fashioned camera and analog reels. This brings together the whole idea and intention of the installations. After that, commuters can see two warriors in a sword fight. This is sure to remind people of the fight between Tyrone Power and Basil Rathbone in the 1940 “western black and white swashbuckling film” The Mark of Zorro.

The next sculpture depicts a policeman grabbing a hooligan’s leg as the hooligan tries to escape the “claws of the law”. Such scenes are reminiscent of the many films of the legendary Charlie Chaplin and other slapstick comedies where such scenes would provide much needed comic relief and bring smiles to the faces of the audience.

Unveiled to the public on May 20, GHMC spent around Rs 11 lakh on the project. Officials say the idea of ​​installing carvings at four different points on the central median was to give the stretch an aesthetically pleasing look. The central reservation has been embellished with shrubs and flowering plants, among other things, to make it attractive to passers-by, they add.