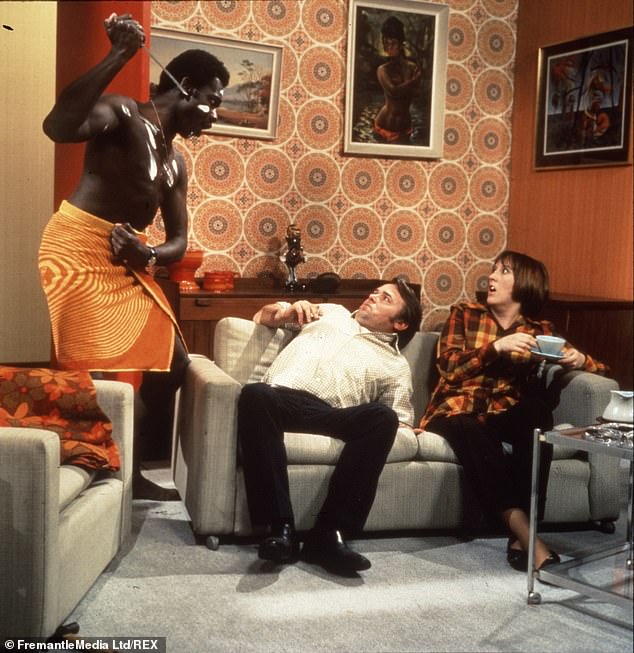 To people of my generation and younger, the name Jack Smethurst means nothing. But for those growing up in the 1960s and 1970s, Smethurst was famous for playing racist working man Eddie Booth on the ITV sitcom Love Thy Neighbour.

Written by Vince Powell and Harry Driver, the ITV show was set in the suburb of Twickenham and featured Bill and Barbie Reynolds (played by Rudolph Walker and Nina Baden-Semper), a black couple who moved in next door to Eddie and Joan Booth (Smethurst and Kate Williams), who were white.

The show ran for eight series and drew 16 million viewers at its peak. In the years that followed, however, he was widely condemned for promoting racial stereotypes and his openly racist storyline.

Smethurst’s death last week, aged 89, has reignited debate about this sitcom and other 1970s TV shows.

Love Thy Neighbor ran for eight series in the 1970s and drew 16 million viewers at its peak. However, he was widely condemned for promoting racial stereotypes and his openly racist storyline.

On Twitter, Times columnist Oliver Kamm said that while he was sorry to hear the news of the actor’s death, “sitcoms like Love Thy Neighbor and It Ain’t Half Hot Mum [the hit BBC show about a Royal Artillery concert party stationed in India and Burma] were reviled for their racism then, just as they are now.

“They are a shameful episode in Britain’s cultural history and should not be understated,” he wrote.

Admittedly, It Ain’t Half Hot Mum, starring Windsor Davies and Don Estelle, is accused of promoting homophobia, due to its liberal use of the word “poofs”. It is also controversial today because white actor Michael Bates wore “brownface” to play Indian character Rangi Ram.

In Bates’ defense, however, there were few established South Asian actors in the UK at the time. A former officer of the Gurkhas, he was born in India and was fluent in Hindi and Urdu, so perhaps the casting had some justification.

There is more to criticize in Love Thy Neighbour. The script featured terribly racist language and slurs. Eddie Booth calls his neighbor Bill Walker “a drop of chocolate” and much worse. Bill doesn’t take the abuse lying down and responds by calling Eddie “honky white” and “snowflake” (not to be confused with modern usage).

Such language is completely unacceptable today, and rightly so. You won’t hear it on TV, and you probably won’t hear it in common street usage.

But where I take issue with Kamm is his assertion that Love Thy Neighbor and other shows deemed unsuitable for modern audiences were “vilified” at the time.

Far from there. They were primetime and hugely popular entertainment, attracting large audiences. (It Ain’t Half Hot Mum had 17 million viewers.) Jack Smethurst, who in real life had mixed-race grandchildren, later said the program “broke down a few barriers rather than had built”. The only complaints I get are from white people.”

His co-star, Walker, who came to Britain from Trinidad in 1960 and enjoyed a long and highly successful acting career (he plays Patrick Trueman in EastEnders), always insisted he was proud of her role in Love Thy Neighbour.

“It was for pure entertainment,” he said. “It was not at all intended to solve the problem of racism. . . Things have changed. What I find sad today is that we have become so politically correct. Kamm and his fellow critics are no doubt well-meaning in denouncing bigotry, but they are missing an important point here. It didn’t seem to occur to them that many blacks and Asians were also fans of these programs. And that includes my family members and their friends.

‘It Ain’t Half Hot Mum’ starring Mervyn Hayes, Windsor Davies and Don Estelle had an actor who regularly dressed in ‘brown face’ and used derogatory and homophobic language

Take my landlady; Born in Bradford in the 1960s to Indian parents, she described to me the appalling racist abuse women of color suffered at the time. Yet she also tells me how much she loved Love Thy Neighbor. She thought it was entertaining, but she also thinks it served another purpose: It revealed to the audience exactly what bigoted white people really think about people like her.

“I think you have to laugh at yourself sometimes,” she said. “We watched it because that’s all there was. But I really hate it when people tell me today what I should or shouldn’t be offended by. I know what racism is.

My mother was a fan of Rising Damp, another popular 1970s sitcom in which Leonard Rossiter played the villainous, bigoted owner Rigsby, who presided over seedy studios. He was regularly racist towards his black medical student tenant, but invariably ended up joking himself.

Mind Your Language, pictured, was a comedy featuring an English language school filled with characters based on a range of national stereotypes

Mom also loved Mind Your Language, a comedy about foreign students learning English, which played relentlessly for laughs about racial and national stereotypes.

And occasionally she would watch and enjoy Till Death Do Us Part, the long-running BBC comedy that cast Alf Garnett as the ultimate blue-collar fanatic, brilliantly played by Warren Mitchell.

Each time he was interviewed about the role, Mitchell made it clear that racism was a mirror for those watching the show. The racists were those who were parodied.

I am okay. I have no doubt that Alf’s dastardly language would have given racists a hard time, but I’m sure the vast majority of viewers would have laughed at Garnett rather than him.

“I remember a teacher who told me [state school] class: “Listen to Alf Garnett, boys – he’s the only man telling the truth on TV.” ‘

I was surprised, however, that my own mother had ever enjoyed a show that reflected such offensive views and language, even in parody.

“It all depends on the intention, in the end,” she said when I challenged her. “It’s different when [the abuse is] actually directed at you. We didn’t really mind hearing it on TV because that was how it was in the 1970s. Obviously times have changed.

Indeed they have, and television is better able to represent the diversity of modern Britain – and reject what is likely to offend, satirical or not, in a more enlightened age. But should we erase the past?

When Britbox launched in 2019, to showcase the best of British TV past and present, Love Thy Neighbor and Till Death Us Do Part were dropped from its streaming service as they were deemed unsuitable for modern audiences.

Warren Mitchell, who played racist West Ham fan Alf Garnett in Till Death Do Us Part has regularly used offensive language. However, when asked about the character, he said he held up a mirror to racists and used the show to parody bigots.

But while it is right to fight racism, bigotry, and prejudice wherever it arises, I don’t believe hiding such agendas helps the debate.

Characters such as Alf Garnett and Eddie Booth illustrate how ridiculous, ignorant, and narrow-minded fanatics are.

They also have educational value for those of us who are too young to remember them. These shows were of their time. They then give us insight into attitudes and help us appreciate how far we have come.

By the way, while researching this play, I found that Mind Your Language is still watched in many parts of Africa and East Asia, but all the characters depicted in it are stereotypes – the impetuous Sikh, the overtly sexual Frenchwoman, the Chinese woman who quotes Chairman Mao at length, etc.

But stereotypes can be synonymous with good humor, as long as they are not malicious. And these skits provided a subtle social commentary, allowing people to laugh not only at others, but also at themselves.

They stand in stark contrast to much of today’s programming, which comes with a strong social message that is usually delivered as subtly as a sledgehammer.

To me, it is troubling that we decouple popular culture from its historical context as dictated by a few self-proclaimed moral guardians.

But whitewashing the past, or insisting – as Oliver Kamm did – that these 1970s sitcoms were not considered entertainment by many, is to rewrite and sanitize British cultural history.