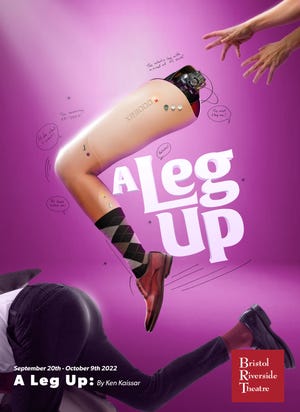 Bristol Riverside Theater’s upcoming season features a world premiere comedy and the Philadelphia premiere of the stage adaptation of a cult film classic.

The 2022-23 main season consists of four shows from September 2022 to June 2023, helmed by co-producer directors Ken and Amy Kaissar.

“As a professional theater in Bucks County, we typically put on about 220 performances a year and welcome about 44,000 people through our doors,” said Amy Kaissar. “It is a major institution which has played an important role in the development of Bristol over the years.”

This season will kick off with the world premiere of “A Leg Up,” from September 20 to October 9.

Developed under the Bristol Riverside Theatre’s America Rising development programme, the comedy centers on the title character, Charles, and the new XR3000, a smart prosthetic leg designed for the US senator running for president.

The second fall production will be comedy mystery “Clue,” based on the popular board game and cult classic from Paramount Pictures written by Jonathan Flynn. It will run from November 1 to November 20.

Spring will bring audiences “Cabaret,” the award-winning classic musical based in 1920s Berlin, from March 21 to April 16, and the heartfelt comedy “Chicken and Biscuits,” from May 16 to June 4.

The Bristol Riverside Theater is one of two professional theater companies in Bucks County alongside the Bucks County Playhouse, continuing to present high quality arts for the region.

The multiple venues of different sizes they work in, all in Bristol, allow them to properly accommodate their different types of shows.

“There’s the 5,000-seat amphitheater where we’re going to put on something that’s going to attract thousands of people, we have our theater that’s 300 seats, and then we also have a studio which is our rehearsal studio which doubles as of a space show, where we can have 60 to 100 people.” says Amy Kaissar.

“We can do a wide variety of things and we just associate them with the space that makes the most sense.”

They offer everything from musicals to comedies, rock concerts, stand-up comedies, children’s theater and more, which Amy Kaissar described as a “huge range of programming.”

Along with the scheduled main stage shows produced by the Kaissars, the company also has a lot to offer, bringing in a diverse mix of talent throughout the year and allowing them to use their spaces to showcase their content.

The theater usually holds about four concerts a year, such as “a Christmas concert in December called ‘An American Christmas Song Book’ – and in the summer we usually hold a summer music festival sponsored by William Penn Bank, and we ‘We are about to close our second year of this music festival,’ said Ken Kaissar.

Like many theaters in the industry, the pandemic has hit their business hard as they have had to adapt and find solutions.

“We’ve both been associated with the company for 13 years, but we started in these roles during the pandemic, so we’re really excited,” Amy Kaissar said. “It feels like our second real season even though it’s our third season.”

Two of this upcoming season’s shows, “Cabaret” and “A Leg Up,” were originally canceled during the 2021 season due to pandemic-related complications.

“The 2020 season was halted about halfway through and we were closed and remain closed for a year,” Amy Kaissar said. “During this time, we have done many things to ensure that we continue to serve our community.”

They’ve adapted by doing things like moving their free summer camp online as well as producing their concerts online, effectively streaming them into people’s homes. Through plenty of alternatives, they kept their ideas alive and persevered to get back in shape.

“We’re back and running full steam and have been for an entire year, and in the coming season we’re bringing back all the remaining events that we haven’t done.” said Amy Kaissar.

For more details on Bristol Riverside Theater and purchasing tickets for their upcoming productions, visit brtstage.org.