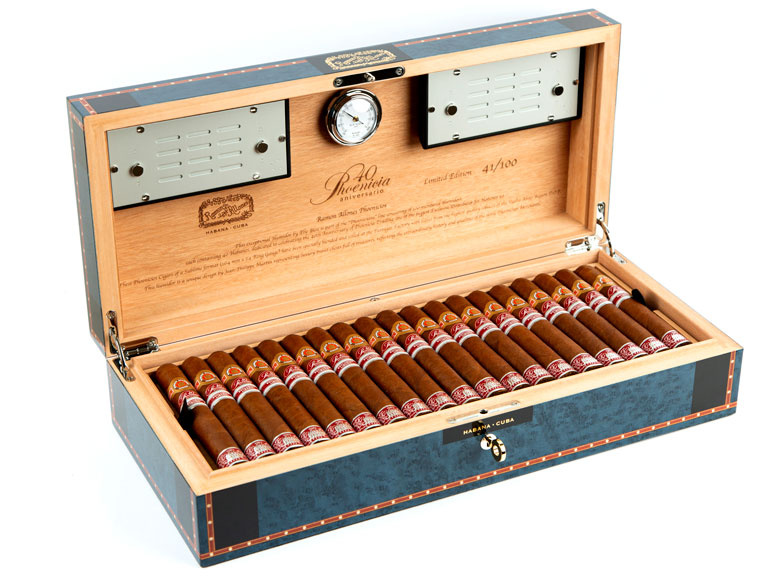 One of the most anticipated cigars of the Habanos Regional Edition series, the Ramón Allones Phoenicio 40 Exclusivo Líbano (165 x 21.4 | 6 ½ x 54), finally hits the market with a limited series of humidifiers.

To celebrate the 40e anniversary of Phenicia Trading, the company released five limited lines and a numbered series of humidifiers containing 40 cigars each and accompanied by a matching ashtray and lighter. They are designed by master craftsman Jean-Philippe Martin, who designed the previous Cohiba 50 and Cohiba Behike 40 years humidifiers, and are produced by one of the world’s most coveted humidifier and accessory producers, Elie Bleu of France.

Of the five lines, four have a production of 100 cellars each and are called Phoenicians, Mediterranean, Volutes and Horizon. The series is sold at La Casa del Habano in the duty-free area of ​​Beirut International Airport at the current price of 24,000 USD. About 300 of the 400 pieces were already sold when they were first released.

The fifth line of humidifiers is even more limited. The Journey humidifier set costs around $ 45,000 and La Casa del Habano has already sold all 40 units produced.

“The Ramón Allones brand has always been linked to Phenicia, all of our previous anniversary regional editions having been produced under the brand,” said Walid Saleh, CEO of Phenicia Trading. “So based on our experience, especially with the previous Phoenicio 30 which was received with great success, we realize that these new limited humidifiers will certainly achieve very high retail values. “

Special versions of Habanos and their distributors attract a lot of attention in the collector’s market, and generally the prices far exceed the original sale value. Stores and La Casas del Habano in Dubai, Kuwait, Greece, Italy and Hong Kong have already purchased some of the sets, and prices are expected to rise as availability is increasingly limited.

For customers who don’t have the budget to afford these limited humidifiers, the Phoenicio 40 Exclusivo Líbano will also be sold in boxes of 10 and 20 units. The boxes should hit the shelves by the end of the year.