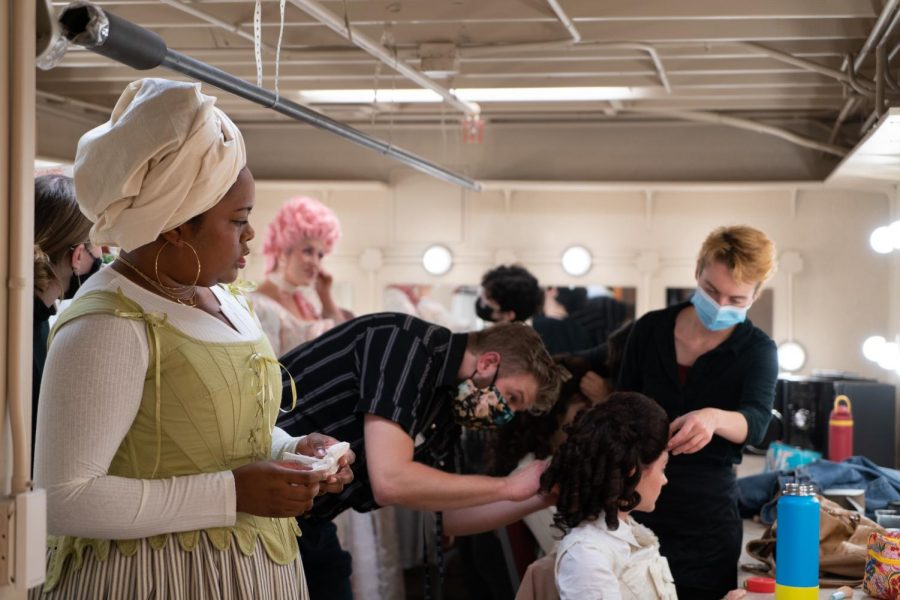 Four women, who have survived in our collective memory as sad, headless figures of a bygone era, will live again, resuscitated by Laura Gunderson in her 2017 play “The revolutionaries. “On Thursday, September 30, these women will walk across the stage at the Harper Joy Theater, not as a tragedy, but rather as a comedy.

” The revolutionaries ” is a feminist comedy centered on four women who were beheaded during the French reign of terror: playwright and political activist Olympe de Gouges, Queen Marie-Antoinette, assassin Charlotte Corday and Marianne Angelle, a composite character of black women Haitian rebels. Written in a play, the four women interact with each other, chat and joke, all while grappling with the horrors of their time.

“It’s a fun play, but also very political, a play that I think is extremely relevant in our time,” said Christopher Petit, drama teacher and director of “The revolutionaries, “mentioned.” It portrays a world of greed, wealth disparity, racism, sexism and violence – a world not so different from ours. “

Lucy Evans-Rippy, the senior theater major playing Olympus, spoke of the play’s timelessness, particularly that of its affinity with her own character, a woman who has been dead for centuries.

“I’m a major in theater, a minor in creative writing, so it was really cool that this was the opportunity to play a role that combines two parts of my identity, which is this super drama obsessed character, because it “I’m a playwright, and also super obsessed with writing a play, so that’s two sides of me,” Evans-Rippy said.

Evans-Rippy spoke about her character, Olympus with a deep understanding of this woman, her personality, and her desperation following her unfortunate and untimely plight.

“[Olympe]it’s very crazy. She’s frantic, at least right now. There is a lot of fear around the guillotine, of death, of impending doom. The guillotine is like a fifth character in the play. She is desperate to create something before she leaves. That’s pretty much what it is, and that kind of desperation, to hold on to your heritage, and yet that knowledge, knowing that it will likely be erased, is a big part of who she is, ”he said. Evans-Rippy said.

Although taking place in a dark period, around characters who have died in tragic circumstances, “The revolutionaries” is still, in the end, a comedy.

“It’s a comedy, and yet there’s this huge, impending fear, and so trying to create space for it, in all this comedic timing, and recognizing the time that the reign of terror was going on. , finding that balance, ”Evans-Rippy said.

Julia Etrusco, junior theater and double major cinema and stage manager for “The revolutionariesThe comic aspect noted not as facetious, but as a celebration of these women.

“There are some very dramatic and sad moments, but I feel like it’s better to see the lighter side of these women,” Etrusco said.

The play gives these four women, remembered for the gruesome nature of their deaths, an opportunity to be women, not just martyrs or targets of smear campaigns. They laugh, they talk, they are afraid. They can just, simply, be.

Before his execution, Olympe de Gouges’ last words were: “Children of the fatherland, avenge my death.”

Evans-Rippy pointed out that it could be interpreted in various ways but, the way she saw it, Olympe saw the theater as this revenge. In this case, revenge, according to Evans-Rippy, means “don’t let me forget.”

“The fact that we always tell her story, and how that is an integral part of this play, who will tell my story?” How will it be said? And so, to be able to perform this play, to tell its story, while recognizing that there was a big void in its story for so long, and now it’s here again. It’s cool to think of how we got the power to do it through the theater and the stories, ”Evans-Rippy said.

Four women whose perspectives were ignored, who were vilified, distorted and treated as spectacles when they died, now see their stories told. In “The revolutionaries», They are treated in a way that Robespierre would not have wanted. A delicious and comical revenge.

“The revolutionaries” will take place from Thursday, September 30–Sunday October 3. Tickets are available online at whitman.edu/hjt.