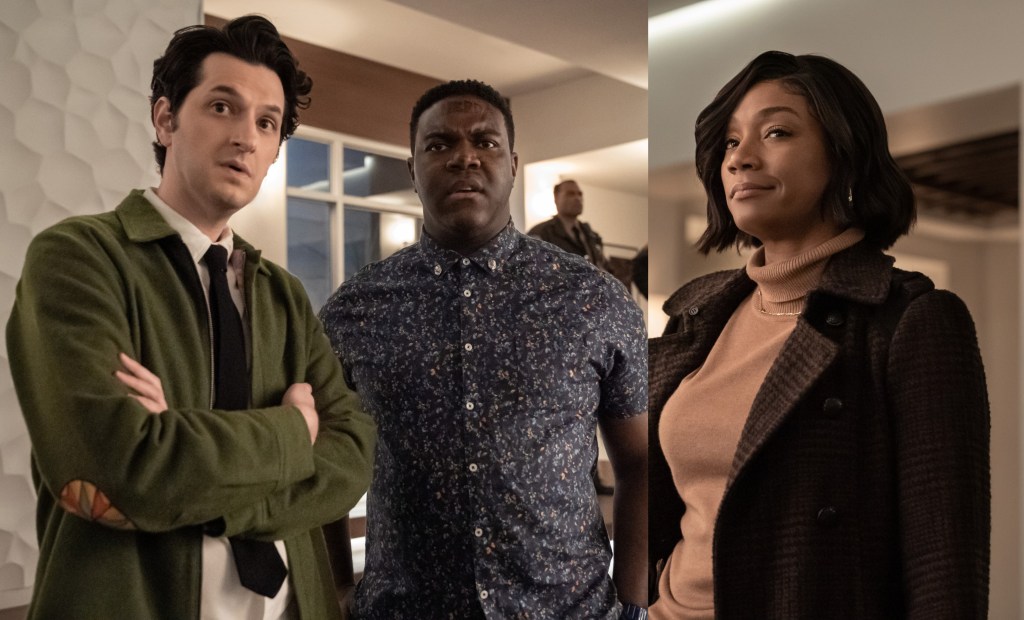 The stars of Apple TV+ crime comedy “The Afterparty” are still laughing at how their friends and family members guessed the show’s killer wrong.

“My brother said Tiffany,” star Sam Richardson said, referring to Tiffany Haddish, who plays the police detective investigating the crime. “He was like, ‘Oh, interesting. She knows all the clues! And I’m like, that’s what a detective does.”

Haddish said friends send him direct messages, also asking if his character has done it. “They were like, ‘No, you did it. Tiffany. I know you did it!’ I’m like, of course.

Ben Schwartz says his father thought he was the child of characters played by Ike Barinholtz and Zoë Chao. “He thought it was the kid. He said it from the first episode,” says Schwartz. “A bunch of people at first said it was me, then they lost that and went somewhere else. A lot of people thought it was Zoë.

Richardson adds, “I think a lot of Walt [Jamie Demetriou] earlier, like up to the Walt episode. I think Walt was a big red herring, everyone had their theory that it was like kind of hidden in plain sight, but like, but obvious enough for people to bite on Walt. My father guessed Mr. Shapiro.

The Variety’s Awards Circuit podcast recently spoke with “The Afterparty” stars Tiffany Haddish, Sam Richardson and Ben Schwartz about filming this very unique show. Spoiler alert if you don’t know the Season 1 ending, as it’s widely discussed – just like if this murderer will appear in Season 2.

But first, our Awards Circuit panel is back, discussing the Emmy comedy and limited series categories and more. Listen below!

“The Afterparty,” by Chris Miller and Phil Lord, is a comedic murder mystery set after a high school reunion, as pop star alum Xavier (Dave Franco) invites his former classmates to an afterparty. in his mansion. But when Xavier falls to his death, everyone becomes suspect in his murder. Haddish plays Det. Danner, who shows up and interrogates Xavier’s classmates one by one, starting with Aniq (Richardson), who becomes the prime suspect but is really there to reconnect with his high school crush Zoë (Chao). Each episode tackles a different film genre, including a musical edit starring Schwartz as Yasper, who still yearns for a music career that never took off.

“People were emotionally invested,” says Schwartz. “Will Tiffany get the person?” Is it Sam? It’s me? And so it was very exciting in the spotlight that people were really obsessed with.

Haddish says Lord and Miller’s call brought her to the project. “I love working with these guys. So when they hit me with that first script, I read it and I was like Yes. Because first of all, I don’t think anyone saw me that way. And I felt like it was an opportunity for me, especially with everything going on in the world at the time we were filming, to show a detective from my perspective and my community. And then the opportunity to work with everyone to make a scene with everyone was the best.

The cast stays close and maintains an active text string. “So many things. We celebrated together via text. A baby came by. OK guys, I have a baby. I’m not supposed to tell everyone, but I bought a baby.

This is just a taste of the boisterous conversation between Haddish, Richardson and Schwartz in this edition.

Variety’s “Awards Circuit” podcast, produced by Michael Schneider, is your one-stop-shop for lively conversations about the best in film and TV. Each week, “Awards Circuit” features interviews with top film and TV talent and creatives; discussions and debates about awards races and industry headlines; And much more. Subscribe via Apple Podcasts, Stitcher, Spotify or wherever you download podcasts. New episodes are released every Thursday and Friday.