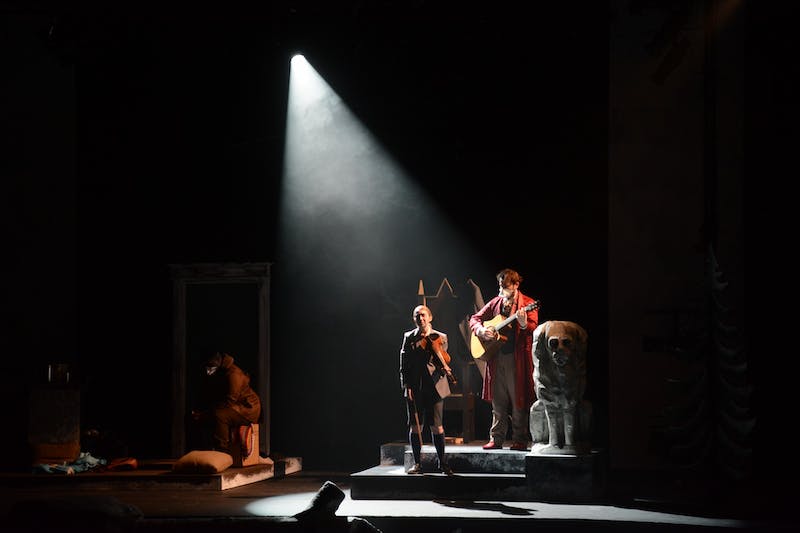 From April 21 to April 30, U.Va. The drama delivered a gripping and thought-provoking production of Mary Elizabeth Hamilton’s “16 Winters, or the Bear’s Tale.” With impressive sets, endearing characters, and stellar performances from the cast, the production was a smash hit.

Directed by educator and actress Kate Eastwood Norris, “16 Winters” provides insight into the 16-year period that passes in the middle of William Shakespeare’s “The Winter’s Tale.”

Queen Her of Sicily, played by graduate drama student Cortney Lowinski, is assumed dead after her husband, Leo, played by graduate drama student Christian O’Neill, accuses her of infidelity and attempts to murder her and their son. She’s not dead, however – instead she flees to a secluded cabin in the woods with her servant, Pauly, played by third-year student Charlotte Gimlin, to wait until he’s safe to return. in Sicily. “16 Winters” takes audiences on the journey of Elle and Pauly as they wait in isolation.

Performed at the Drama Department’s Culbreth Theater, “16 Winters” explores modern power dynamics, toxic masculinity and time through Shakespeare’s historical setting, in a show complete with songs, jokes and an examination of human nature from an animal’s point of view.

His struggles with maintaining a positive attitude in the cabin may sound familiar to many viewers, as it closely resembles the experience of most Americans at the start of the COVID-19 pandemic. Lowinski delivered an engaging and earnest performance as her – her frustration and fear for the future as time ticks by resonated with audiences who have experienced similar isolation over the past two years.

When she finally decides to leave her cabin and flee to Bohemia, she encounters an eccentric and socially conscious group of Instagram-obsessed teenagers – setting the show squarely in the present in their modern clothes and hashtag-obsessed slang. This choice gave a sense of universality to the show’s themes — it helped audiences understand that despite the age of its source material, everyone can learn something from “16 Winters.”

Throughout the show, snippets of wisdom from an unlikely character – a bear, played by graduate drama student Haydn Haring, who lurks outside her and Pauly’s cabin and spells out the rules different aspects of life, like courting a mate or catching a fish to eat with a booming voice and impressive stage control. The bear’s frequent stares and Haring’s wild, jarring facial expressions forced audiences to confront their own animalistic tendencies.

Back in Sicily, Leo is visited by the ghost of his dead son, played by freshman Katherine Haines, forcing him to confront the guilt over his abuse. Leo frequently expresses his angst through song throughout the piece, often picking up a guitar to express his anger or shame. The songs kept the audience engaged in the plot and brought another dimension to the production. O’Neill brought both impressive vocals and nuanced acting to each song, striking an impressive balance between humor and angst. O’Neill cited Leo’s complexity as a reason to audition for “16 Winters.”

“He’s very stuck, at least at first, and seeing someone being so stuck and not knowing how to get out of it is really interesting,” O’Neill said in an interview with The Cavalier Daily.

“16 Winters” explores themes that may not have been explored by Shakespeare’s version – it examines the gender dynamic between its two main characters and the toxic masculinity behind Leo’s jealousy.

“Leo is quite obnoxious,” O’Neill said. “He is a bit of a rage monster. And so it’s both something I can relate to a bit and a challenge.

In a moving monologue by Her, the Queen expresses the vexation that accompanies the mere fact of existing as a woman. Lowinksi moves deftly between heart and pain, balancing several humorous beats with the rather heavy nature of the monologue. Here, the Queen’s feelings are front and center in the story in a way they never were in Shakespeare’s original play.

The staging of “16 Winters” by the drama department was simple, but captivating. Even when the scenes changed location, the set and actors from the previous scene remained on stage, amplifying the connection between each of the concurrent storylines. One moment the audience found themselves in the middle of a dark and eerie winter forest – the next moment they were at the foot of the king’s throne. The lights go out, and once again the scene changes to a cozy shack full of bohemian hipsters. The dynamic way the scenes blend into each other envelops the audience in the show’s narrative.

“16 Winters” presented the final show of its two-weekend run on April 30. After a lonely and harrowing few years, this clever show with relatable characters and a resonant message was just what the college community needed. “16 Winters” concludes the 2021-2022 season of the University Department of Theater in a beautiful and important way.