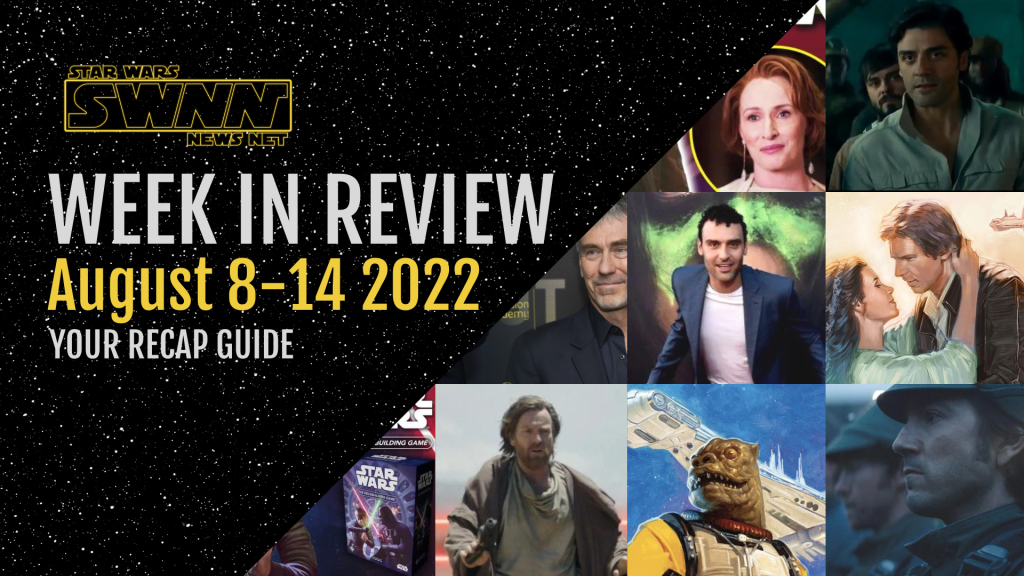 We are a little over a month before Andor drops on Disney Plus! We have a big trailer breakdown for our friends’ show The Resistance airing this week.

We also explore the discussion around a Obi Wan Kenobi season 2 (with Ewan McGregor offering his two cents), hype for The Mandalorian season 3, news surrounding The Acolyte casting, and more.

With many shows on the horizon, it’s hard to keep up to date with all the news and information reaching us at the speed of light. That’s why we’re creating this weekly guide to help you stay connected.

Check out the week’s recap below. Enjoy!

Lucasfilm released its production brief on Andora 29-page document available for the press where they detail the most relevant aspects of everything and everyone involved in the next star wars series on Disney Plus. In the document, the company confirmed that three-time Oscar nominee Nicholas Britell (Moonlight, Estate) composes the music for the show. Learn more about the series!

We’ve known for a while now that Andor will be a spy drama set in star wars galaxy, but showrunner, writer and director Tony Gilroy opened up about what the series has in common with his previous work, such as The Bourne Identity. Discover the interview.

We are all waiting to see the contents of the Andor series. Recently, a bunch of new images and interviews have been released which give a bit more information about the upcoming show. Read more.

In a recent interview, Star Wars actor Oscar Isaac, who played Poe Dameron in Episodes VII-IX, was asked if he would play the character again, to which he replied that although he can’t give a definitive answer at this time, he would definitely consider it if the story and associated creations were the right ones. Check it out.

In a recent interview with IndieWire, Prey Actor Dane DiLiegro, who plays the Predator in the new Hulu movie, revealed he’s currently working on a project for Lucasfilm. When asked if he had shot anything since PreyDiLiegro replied “Um, that I have the right to talk about it?” Read more!

Obi Wan Kenobi was always described as a limited series, six-part event that would wrap it up for Ewan McGregor’s time as the character. However, before the series was released, Kathleen Kennedy and Ewan McGregor began considering the possibility of returning for another season. While there’s no official confirmation that a new season will happen, McGregor recently said he believes sooner or later it will. Read more!

Giancarlo Esposito recently made an appearance at Thomas J. Henry’s Superhero Car Show & Comic Con in San Antonio, TX where he was asked about Moff Gideon’s future in The Mandalorian. He took a moment to hype the next season of the acclaimed show. Check it out.

Disney Plus has teased on social media that this year’s Disney Plus Day, which takes place on September 8, will be filled with “epic events, premieres, surprises and more.” The event will take place the day before D23 Expo kicks off in Anaheim, Calif., where Lucasfilm will co-host a panel with Marvel Studios on Saturday, September 10 at 10 a.m. PT. Read the report.

Aug. 8 – ‘The Acolyte’ head Amandla Stenberg says Lucasfilm had them in mind for the show

Amandla Stenberg is on a roll right now. After appearing in Body Body Body and having the third-best average opening weekend per theater of the year, Stenberg travels to a galaxy far, far away this fall in The Acolyte. Find out what they had to say about their involvement in the long-awaited series. Read more.

Rosario Dawson asserts that Ahsoka Showrunner Dave Filoni has seen a first cut of his live-action spinoff and has praised the project as it unfolds so far. She also teases how Thrawn is involved! check it out.

Our full breakdown, review, and speculation on the new Star Wars: Andor trailer! We’re also bringing back our One With the Force segment where we answer questions like, should you show someone a scene from a star wars Disney Plus live-action series, what scene would it be? Look now!

Aug 11 – Sith Council – Will there be lightsabers in the ‘Andor’ series?

In the new episode of The Sith Council, Kristian Harloff and Steph Sabraw answer some questions submitted by fans, like will we see lightsabers in the next Andor series, or should The bad lot move its planned release date? Look now.

Tony Gilroy went ‘old fashioned’ for Star Wars: Andor and by that he doesn’t mean there aren’t digital effects of course he means they didn’t use the Stagecraft LED room technology known as “The Volume” , the first one star wars live Disney Plus series not to use it. We discuss this debate about how these shows are made and Gilroy’s approach. We also discuss all the latest star wars news including Cameron Monaghan addressing the rumored live-action Cal Kestis and the real-life politics shaping stories in a galaxy far, far away. Watch the episode now!

The final chapter of Charles Soule’s Qi’ra saga has been unveiled. From this month of November, Star Wars: Hidden Empire follows the events of Bounty Hunter War and Crimson Reign. StarWars.com spoke with Soule about what we can expect from the miniseries that marks a high point for all of Marvel star wars comics set during the period between The empire strikes back and Return of the Jedi. Read more.

August 9 – A new clip from “Star Wars: The Princess and the Villain” is released ahead of next week’s release

StarWars.com released a brand new excerpt from Beth Revis’ new novel Star Wars: The Princess and the Villain, which will depict Han and Leia’s wedding shortly after the Battle of Endor. In this new fragment of the book, the couple arrive at the starcruiser Halcyon, the first stop on their honeymoon. Check it out.

The world of Star Wars trading card games has been quiet for several years, but it looks like that’s about to change. Comicbook.com has announced that next year Fantasy Flight Games will launch Star Wars: The Deckbuilding Game, a new competitive PvP experience set in the iconic galaxy far, far away. Learn more about the upcoming game.

“It’s time for one last adventure aboard the Halcyon with the fifth and final issue of the Halcyon Legacy arc. The galaxy’s first luxury liner has gone through heartbreaking trials in its time. being taken in by the Nihil or a heist led by Maz Kanata, each issue left its unique mark…” Read our review of the conclusion!

Despite a whole trailer with a ton of memorable moments, Star Wars Jedi: Survivor remains as mysterious as ever. Cameron Monaghan recently spoke with Coming on the next video game and what we can expect from Cal Kestis this time around. Read the report.

Tony Gorick is a self-proclaimed candy connoisseur with a passion for star wars and roller coasters. Whether he’s working at his friend’s arcade or watching classic Saturday morning cartoons, he does it with uncanny enthusiasm.